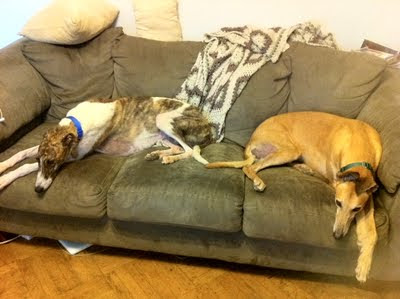 Three days.  It only took three days to get what I consider to be the "classic multiple greyhound household" photo shot.  Maera was a little leery about jumping up on the couch in the beginning; she'd get her front legs and torso up but to get her back end up, required help.  Was it just being unsure, or just not being completely recovered from her spay?  (She was only spayed on Sunday, and still has the stitches.)  She doesn't love the couch quite as much as Argos does  (YET) but will get up on her own now.  She jumped up to snuggle with me this morning while I was on my every-Saturday-morning phone call to my mom.  My prediction:  it's only a matter of time.  Argos was wary of the couch in the beginning too, and now we have to go to extraordinary lengths to convince him to jump back down.

Maera is settling into our household very easily, though there are some adjustments that we have all had to make.  I don't begrudge her that in the slightest, though - I know that she herself is the one that has had to make the most adjustments.  She's doing a fantastic job of it, though, and each day we have her, I see her becoming more of a house dog and less of a kennel dog.

She and Argos are still getting along well - the only time that they have had a little tussle was when they were crammed into the back of our small car together and someone sat on someone's head.  And even that was a "give me some space" tussle and not a "I want to kill you" tussle.

We've given her several brief encounters with the cats (always tightly leashed and controlled, for the safety of our feline friends) and she is showing no signs of having a higher prey drive than we originally thought.  She's curious about them, but I think that's normal.  All it takes is us to say her name and she immediately forgets the cat and turns to us, tail wagging.  Today, Jeff had her and Argos in the study with him, with two baby gates, one on top of the other set up in the doorway, keeping them all in.  The fosters were allowed to run free just outside the door.  She was aware that they were there, but didn't really care all that much, besides touching noses with Foster cat Patches through the holes in the gate.  (Damn, I was too slow to get the camera!)

As an aside, foster cat Mitchell, after running around for a bit, found a new cozy napping place up in the attic; my old doll bed.  So, I brought it back down into the fosters' bedroom for him.  I'd originally had it in their room, actually the guest room, anyway, as part of the decor but had removed it when we "catted it up" for the fosters' arrival.

Bit is the one that is taking Maera's arrival the hardest...  she is frozen in fear every time she even sees the dog, even if Maera is crated.  While I feel sorry for her, I'm less worried than I would be... she reacted this way when we first got Argos.  I think it even took her a couple of months, but she got over her fear, so I have no reason to think that it won't happen again in her own time.  As you can see, she has no qualms about stealing their nice big beds when they're nowhere around, though. 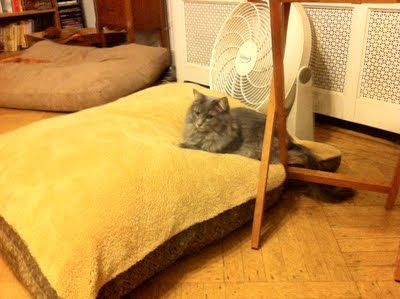 On night number two in our house, Maera played so hard with the squeaky toy in the picture that she crashed out in this position and took a nice, long nap. 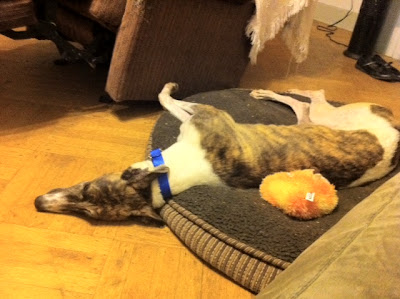 So, I would say that we're all doing very well.  Right now, as I write this, Argos is crashed out on one of the beds, Maera on the other, and husband on the couch, and the cats safely dozing upstairs.  I am the only being awake in the afternoon heat.

Posted by House of Carnivores at 2:16 PM