When I was writing about the dog days of summer the other night, I stated that I would have an announcement to make in a day or three.  I didn't want to come out and say anything about it until it was a "done deal" but now everything is finalized, so I can blab about it on my blog!

Houndstooth guessed correctly when she guessed that we were getting a new greyhound!  You may also remember, a couple of posts ago, that in my lists of beautiful things that gave me joy, one of the pictures that I posted was of a greyhound.  My caption for is was "Putting a smile on the face of a dog not yet anyone's own."

Here is the pic, to recap: 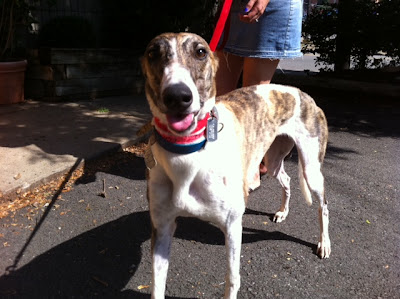 Well, that dog "not yet anyone's own" in very short order became OUR dog, and she's lying on my living room floor even as I write this.

Her name is Maera, after the Maera in Greek myth.  (It didn't end well for that Maera, but at least she got made into a constellation?)  We really wanted a name steeped in Greek legend and mythology to go with Argos, but it was very difficult to find a suitable name, since I wasn't enamored with any of the goddess names, nor did we want to go with any of the muse names.  And Maera is a lovely name, so it's what we decided upon.

Saturday, I went to video and take pictures of the three new dogs in the Steel City Greyhounds adoption program.  Maera, at that point named Betty, was the third and last one that I videoed.  And I realized, as I was taking some great footage of her, that I was never going to share that video on the web, because I wanted her to be mine, all mine.  I was worried that Jeff wouldn't want to take a second dog in (I don't know why, we seem to typically be on the same page with our animals.)  But once I got home and talked to him, he told me that if she got along with Argos and was cat safe, and I really felt like she was the right dog for us, that we would make it work.

So...  she gets along with Argos, and she's cat safe, and Jeff fell in love with her when he met her.

And the rest is history.  We had to wait until today to get her because of a social engagement on Wednesday night - but she is here now!

Here are some additional pictures of her first day here in the house.


Some quick facts about Maera:

1.  Argos seems to like her.  He has been fine sharing beds, toys, and even food with her, at least so far.

3.  Argos' sire also happens to be Maera's grandsire.  Does this make him her half brother or her uncle?  Hmm.

4.  Maera is insanely food-motivated.  She came in the house, and promptly ate every piece of kibble that Mr. Messy Eater had sprayed all over the floor, her entire dinner, every treat that we gave her, attempted to eat our dinner, and also attempted to eat the cat food.  Every once in awhile she walks back into the dining room to see if more food has spontaneously appeared.

5.  Her first reaction to seeing Charlotte on my lap was to gently sniff her, and then to ever so delicately lip at her ear.  Charlotte is still recovering from that little faux pas upstairs, in her "quiet space."

6.  Maera shot up our outside stairs like a champ.  I'm anticipating more trouble with the hardwood ones inside, when we take her up to bed in a few minutes.

7.  Maera has a habit of jumping up and putting her front paws on your shoulders and covering you with kisses.  I know that we need to train her not to do that, but it's kind of sweet and funny now that I expect it.

8.  Every time one of us starts talking after there's been silence for a few moments, her tail thumps against the ground.  She also already recognizes her name and responds to it.

We're about ready to take her upstairs... complete with leash and muzzle until we're absolutely certain that she can be trusted around our cats.
Posted by House of Carnivores at 6:51 PM