I don't even know how to start writing this.  So I suppose that I'll just come out and say it and then fill in the details.  Romeo died this evening.

It completely came out of the blue.  The veterinarian called us this morning to say that the urinary blockage had been cleared, and that he was going to remain there on fluids until he was able to urinate on his own.  They made it sound like we'd be going to pick him up either late tonight or early tomorrow morning.  Everything sounded great at that point - I mean, sure, he'd been hospitalized, which is never great, but the doctors knew exactly what to do with him.  It's not like it's unusual for neutered male cats to get urinary blockages.  We were even told that the blockage had been cleared out very early on, that we were lucky to catch it so early.

Which is why it was such a shock to receive a call this afternoon to say that they had to take him off of the fluids, because there was fluid build-up around his heart, and that he was on oxygen (in an oxygenated cage.)  The vets said that this did occasionally happen when a cat was on IV fluids, and that dosing them with Lasix usually did the trick.

Half an hour later, we got a second phone call.  Romeo was completely unable to breathe on his own, and they were intubating him and clearing his lungs out ASAP.  They said that the next step was to put him on a respirator, because he simply wasn't breathing enough on his own.

At this point, we had had enough of sitting at the house waiting for these terrifying updates, so jumped in the car and drove over to the clinic so that we could be there to make whatever decisions needed to be made.

To make a long story short, they spent another hour trying to stabilize him.  They did their very best, and were very competent and professional about it, and kind to us, but it wasn't enough to bring him back.  He never completely woke up from the sedatives that he was on.  When they came back to tell us that despite the assistance with breathing, the tons of lasix and other drugs that had been pumped into him, that he was failing.  The doctor said that there was really nothing else that we could do for him at this point, besides putting him on a respirator - and even then, his chances of survival were not good.  So we made the painful, but I think inevitable, decision to euthanize him.  He never woke up from his sedatives, so he went quietly, and without fear or pain.

They think that he probably had an underlying heart condition that just hadn't started manifesting in any obvious ways yet.  The fluids weren't the cause, but were what revealed it.  If the fluids had been the cause, he should have rebounded after getting lasix pumped into him.  (In another post, someday when my heart does not feel so bruised, I may rail against the fates for giving us not one, but TWO cats with heart problems.)

I held myself together fairly well while I had to, but now that it's all over, I'm sitting here at my desk trembly and tearful, and I feel so bereft.  I find myself glancing off and on over to the window ledge where he'd be sleeping, if this was a normal night, and am somewhat startled when I don't see him gazing back at me with his knowing eyes.

Romeo was with us for almost exactly one year... one year and one week, exactly today.   I didn't write about his "Gotcha Day" over Memorial Day weekend, because we were busy with family, but I'd planned on writing it this weekend now that things have settled down.  His time with us was filled with its ups and downs; everyone that reads this blog probably remembers that he never quite fit in with the other cats here... in fact, they were complete and utter little bitches to him.  But through trial and error (and I'll admit, a small amount of grumbling) we found a way to let him carve his own niche; and I do think that he was happy for the most part.

Romeo was a cat that was happiest when he was surrounded by the humans that loved him.  Preferrably, to have us both petting him and talking to him and giving him attention at the same time.  He would purr and purr, rubbing his face first on me, then on Jeff, then back to me, repeat.  He was a lover.  He had his days when he seemed sad, and it always upset me to see this.  I have wondered if he was remembering and missing his first family, or maybe he was sad that the other cats weren't friendly to him.  But the days when he was happy, and  in all honesty, that was most days, he was a bright spirit, and was always glad to see us. 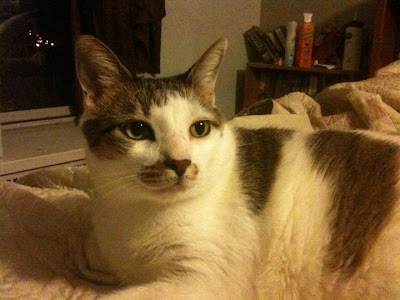 Posted by House of Carnivores at 7:37 PM