It's so odd how things happen.  We've had Argos for a year and a half, and he and the cats have tried very hard to ignore one another.  Their relationships weren't antagonistic, they just had very little to do with one another.  And in one day, we get all of these pictures...  go figure. 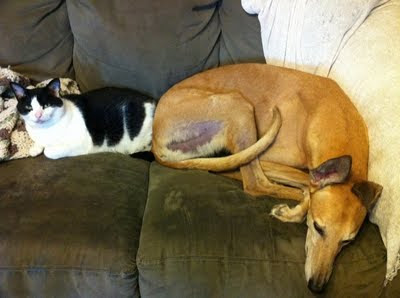 What is this...  Argos and... CHARLOTTE?  That's the pairing up that I never thought I'd see happen.  Charlotte just isn't the type.

What we think happened is, Argos jumped up to claim his usual spot at the end of the couch before he noticed that Charlotte was already there.  Instead of freaking out and jumping back down, he sandwiched himself in.  What surprises me is that Charlotte stayed up there, and looks reasonably calm about it.

Later that night, we had the foster cats downstairs with us to let them socialize with other humans besides us.  (We had a few friends, all cat-lovers, over.)  Mitchell and Patches have no fear of Argos.  As you can see with the pictures of Mitchell below.