A year ago this weekend, we decided to take the next step in selecting a greyhound by driving over to meet a large red fawn boy named "Willie."   And once we met him, and looked into his big brown eyes and saw him hesitantly wagging his tail at us, unsure of who we were or what we wanted with him, we fell in love.

Kind of like this expression...  this is a photo of him the very afternoon that we brought him home.  I can definitely see his uncertainty in his face, for all that we had just introduced him to his first toy ever! Look at his just-off-the-track ribs! 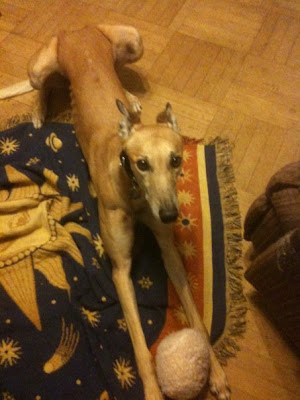 They actually let us take him with us, with a muzzle, to introduce him in our home to our cats, since we were of course very concerned that he be able to get along with them.  We did this, and Jeff said that he knew the moment we put him into our car that he was ours.  So did I, really, but I wasn't letting myself get my hopes up yet.  I feared falling too far too fast and then having him turn into a cat-eating machine as soon as we brought him into the house.

But obviously, that never happened.  He was fascinated with our house, and wanted to sniff everything in it, except for the cats.  He didn't look at them or react to them in any way, even though they were following him around hissing at him constantly.

We only took him back so that we could fill out the paperwork  (we'd already passed muster and had our application for a dog accepted, so by then it was just a matter of choosing a dog.)  Maybe someone a little more sane would have taken him back, thought it over for a day or two, then agreed to take him, AFTER getting doggy supplies, but no, not us.  We signed all of the paperwork, and then had to immediately go to Petco to buy everything, and I mean everything.  Bedding, food bowls, brushes, shampoo, food, toys, you name it...  We were given a crate on long-term loan from Steel City Greyhounds, so didn't need to worry about that.

We renamed him Argos.  I've never looked back, and of course do not have any regrets, even when the doggie is trying to coerce me into taking him outside into a snowstorm so that he can pee.  (meaningful stare at said dog.) 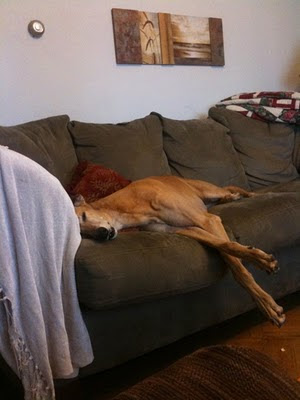 And here is a photo of a considerably fattened up, satisfied-looking hound!

It doesn't seem like we've had him for a year...  I can't remember what life was like before.  There was actually a time that I wasn't greeted at the door by a whirling dervish every time I came home from work.  Never looked into his eyes while I scratched him under the chin and listened to his teeth clack in happiness.  Never listened to him stretching out on the couch or on his dog bed, groaning as he relaxes.  Never saw him running with joy across the backyard. How sad!  (Not that I knew what I was missing.)

Argos has definitely made a convert out of both of us. I daresay that there will not be many times in our lives that we are without a greyhound in our house.

So, Argos, m'dear, Happy Gotcha Day!  2010 was so much brighter because of you!  And may we have many more of these celebrations together.
Posted by House of Carnivores at 4:10 AM