So when I came downstairs this morning, the husband told me that I should go in and say hi to Romeo, and while I was at it, take his picture.  I gave him a really strange look, since that does seem like a strange request.

But this is what greeted me when I walked into the living room. 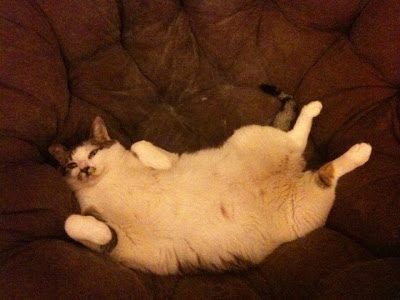 SOMEONE has an enormous belly.

Which brings me to the topic of my post.  Pets and dieting.

How do you do it?  I've had to focus this year on taking Argos the other way - he needed to gain weight, and it took quite a long time to get anything to stick to those ribs!  Two of our cats are still in the normal weight range.  Really, only Romeo and Charlotte are pudgy, and we're just going to let Charlotte be because of her medical condition.  Romeo is the only one that needs to go on a diet.

We knew this when we got him from the shelter in May.  In case we didn't figure it out for ourselves then, our vet told us the same thing.  But the diet that she recommended didn't work very well.  She recommended that we feed him 1/2 can of the gluten-free Fancy Feast canned cat food, twice a day.  We tried this...  and he inhaled the food each time, but then was hungry and crying for more.  I would come home from work and he'd have shredded and eaten large portions of the newspaper, and once he shredded and ate the monthly mortgage bill.  (I'm guessing that "my cat ate it" doesn't hold water with mortgage companies, else I'd be applauding his effort.)  Then he developed a bladder infection, partially due to stress, so we took him back off of the diet and let him go back to kibble. After we cleared that infection up, we put him back on the diet, only to have him start to get diarrhea and throw up.

So I admit it, we haven't tried to do much since then, especially since he at first was so unhappy about the other cats.

However, I think we've turned a corner with him.  Yes, he still has to be kept away from the other cats in general, but he has the entire first floor of the house to himself, and seems to be very happy with that arrangement.  He's affectionate with us, and tolerates/bordering on likes Argos, so those two get to "hang" together if we leave the house.  He gets to spend time with us when we're eating, watching t.v., relaxing in the living room, and he exercises a bit more since he has more space to move around in.  Just this week he became interested in playing!  (I never could get him to do it before, but now he likes playing with dangly toys.)  We let Charlotte downstairs a couple of times a day so that he does learn to deal with other cats, just for short amounts of time, and definitely not Bit, his primary tormenter.

So.  I feel like it's time that we put him back on a diet.  It's for his own good; I know that it isn't fair to let him remain obese.  So, any recommendations?  I'm willing to do the Fancy Feast diet again if we have to, but I'm guessing that for a kitty his size, a can daily was just not enough.  I'm open to suggestions!
Posted by House of Carnivores at 5:08 PM