Two blog posts in one week!  The planets must be in perfect alignment or something.  (I really AM going to try to be a more frequent poster.)

I need to catch everyone up on our "missing months."  Yesterday, I told you about our two foster boys, and how we adopted one of them, Batman.  He's an adorably cuddly cat, who just enjoys being with his humans, snuggling on a lap, or up against a leg.  He also reacts very calmly to the other cats, which is a bonus when dealing with Miss Bit...  as LONG time readers might remember, she tortured Romeo (RIP, buddy) relentlessly because he would react to her by running away.  Batman doesn't confront her, he just looks at her, blinking.  Bit eventually got bored with trying to get a rise out of him, so doesn't bother him.

Summer faded into fall, and with fall came our vacation - we didn't plan to go very far, we just wanted to be able to get away for a few days.  Our requirements:  it had to allow dogs, and it had to have a hot tub.  Everything else was negotiable.  We found the Getaway Cabins, in Hocking Hills, Ohio.  The picture below is our cabin - the one that they call "The Guest Nest."  You can't see it, but it has a deck on the back, with a nice large hot tub.  It was a fantastic cabin. 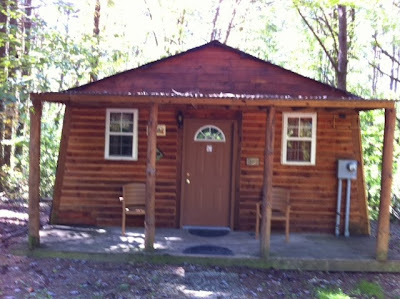 It was a very relaxing time.  We took several easy hikes with the dogs, lounged in the hot tub, played board games, and watched movies.  Very low-key.  Very needed.  Well, sort of low-key.  I'll have to tell you about the stray cat in another post...  let's just say that I can't even head into the "back woods" without finding a cat that needs help.

I took a lot of pictures, which is why you don't see any of me, haha.  That and I'm a camera-phobe.  I also learned a very valuable lesson:  when taking lots of pictures, do not leave the camera's battery charger at home.  I got quite a few pictures while we were hiking around Cedar Falls, but none the following day on the much more dramatic hike to Old Man's Cave or Stonehouse.  I was very disappointed.

We encountered several people on the trail that had never seen greyhounds before, so Argos and Maera had a lot of very excited people to meet!  They handled themselves with their usual grace and made us proud.  (Especially when compared to some other numbskull dog that was extremely dog-aggressive and barked at us the entire time we were trying to actually view the waterfalls we had hiked so far to see.)

I think that they enjoyed themselves as much as we did, though they were very nervous and unsettled in the cabin.  We constantly had dogs pacing about, and once Maera brushed past me and burst out the front door and started to run away!  Fortunately she immediately responded when I whistled for her to come back.  Oh, it took awhile for my heart rate to return to normal over THAT one.

Unfortunately, during the vacation, we had a bit of something hanging over our heads:  I'd taken Argos for his annual check-up a few days prior, and they weren't entirely happy about his blood work.  It seemed that his thyroid was a bit low, even for a greyhound (who are notoriously low.)  They thought it might have something to do with his weight loss.

However, upon our return and additional bloodwork, they determined that his blood was fine, and that he was very healthy for his age.  The weight loss was probably just due to Argos being Argos:  he's never been much of an eater, and when bored, upset, anxious, or frightened of thunderstorms, he refuses to eat.  We've tried to up his meals to three times a day now to give him some extra calories without increasing meal size, and I think he's starting to fill out.

This Thursday, he goes back in.  He needs dental work again, and is probably going to lose some teeth.  He also needs to have a lump excised from the top of his head and biopsied.  I try not to worry about it too much - the vet is fairly certain that it's a cebacious cyst, but it's hard to know for sure because it's covered in fur, and it's painful enough to the touch that he will fight you if you try to mess with it.  Hope with me that it's just a cyst.  I'm certain that I cannot handle any more pet medical drama for a good long while.

Fingers crossed for the boy!

Posted by House of Carnivores at 6:44 PM