So, a lot has happened since I went on my unintended hiatus over the summer.  To catch you up on the biggest highlights, I must backtrack a little bit, to right after Charlotte passed away, because there was something that I did not post about...

We took in two new fosters.  The shelter had a lot of sick cats at the beginning of summer.  The sick room was full, but the cats kept getting sick (upper respiratory infections - it's a problem for shelters all over the world, and very hard to prevent.)  The very best way to get a cat healthy again is to get them out of the stressful shelter environment, and into a home, with a course of antibiotics and a soft warm place to sleep in comfort.  This is where foster homes come in.  It's really an ideal foster situation - you get a cat to love and coddle, and you keep them for about two weeks until they finish their medication and their symptoms clear up.  Then you take them back - none of this long term stuff that comes up with behavioral fosters.

It was really only a couple of weeks after Charlotte passed that the active foster homes got an email from the foster coordinator telling us about the sick cats, and asking us to step up to take a kitty home if we could.  I came home from work and asked Jeff it it bothered him that I might go pick up a sick cat.  Even if it delayed us refinishing the upstairs floors, like we'd planned.  Being Jeff, he agreed that I should go, so I did.

I picked out this handsome guy, unoriginally named "Kitty."  His cage was eye-level with mine, and boy howdy, this one can use his eyes to lure you in.  (And he's a real sweet-heart too.) 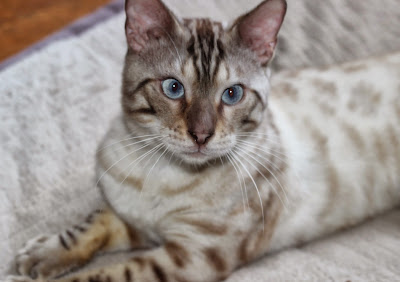 A vet tech helped me put him into my carrier, and left the room for a few minutes to go get his meds for me to take with us.  As I waited, I felt a paw swipe out of a cage at ankle level, and grab onto my pant legs.  My hair felt like it stood on end... that is exactly how Charlotte introduced herself to me.  I looked down, and there was a little black paw.  I crouched down, and stared into this face. 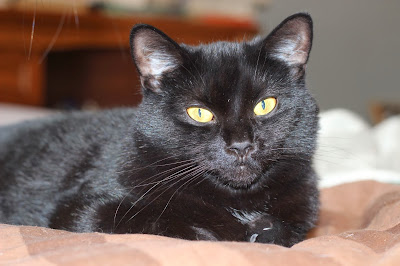 He had a snotty nose at the time, and one eye was crusted shut.  But.  There was the whole pants-grabbing thing.  And I've always had a weakness for black cats anyway...  so when the vet tech brought Kitty's meds in, I looked over at her and said, "So...  I don't have two carriers.  But if someone could come up with another carrier, I could take one more with me..."

A cardboard carrier was produced, and the poor overworked tech went back out to get additional meds for... his name... was Batman.

I packed both boys into my car and took them home.  When I carried them into the house, Jeff looked at the two carriers and started laughing.  It is NOT the first time I've done this.  He now calls it "Melanie Math," which only pertains to cats, and always means that I just can't count when it comes to kitties.  I always bring home more fosters than I set out to get.

It was an... interesting foster time.  Kitty, a Bengal, had very high energy levels, and we learned just what it meant to have an exotic cat in our house.  That boy was afraid of nothing.  Dogs?  Let's run at them and head-butt them from across the room.  The dogs were absolutely terrified of him, LOL.  Bookshelves?  Let's climb them to the ceiling!  Flatscreen television screen?  Let's try to climb it!  At first, we had him and Batman quarantined together, but Kitty had a really tough time getting over his cold, and had to change his antibiotics.  We separated them, but not before Batman, who had gotten better, got whatever nasty strain that Kitty had.

Finally, we got Kitty's symptoms cleared up, and just in time, because I was contacted by a potential adopter!  I took him back to the shelter two days before she was to meet him, because now Bit was sick, and there was no way that I could manage a three-way quarantine in this house.  I felt terrible that one of my own cats got sick... usually a quarantine, in the form of a closed door, has prevented the sickness from spreading, but either one of us didn't wash our hands thoroughly enough, or she got it during one of the ten million times that Kitty ran into the hall when I opened the sick room door.  (Bit got better in a couple of days.)

We nursed Batman's symptoms for another week, and he was reasonably healthy again.  It was time to take him back to the shelter.

To make a long story short, Jeff approached me one night.  Actually, we were in the car together, and I was talking about how I was sad that we'd have to take Batman back to the shelter that weekend.  "You know," he said.  "I sort of already knew that we were going to keep him when you told me about how he grabbed your pant leg, since that's how Charlotte did it too."

To make the story even shorter, Batman only went back to the shelter to get his vaccinations updated, then returned to our house.  Where he remains.  He gets along well with the other cats.  He isn't afraid of the dogs.  And he's the snuggliest comic book character ever.

Kitty did get adopted two days after returning to the shelter, but not before he caused havoc by climbing up into the shelter ceiling and going exploring up there all night long.  He was only discovered when the ceiling caved in, dumping him at the feet of a very surprised worker, who was just starting the morning cleaning of the cat cages...

I heard back from his adopter a couple of times, and it sounds like he's in a perfect home, where he is appreciated for his mischevous nature.  (And he got a better name.) 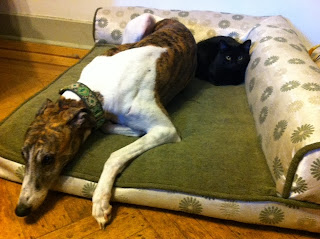 Posted by House of Carnivores at 7:09 PM