I've really resisted getting involved with the feral cats in the neighborhood...  most of the time, they didn't bother coming to our house, and if one or two brave ones did, usually once they saw our dogs, they'd vanish and not come back.  I personally resisted it because...  well, it seemed like a recipe for heartbreak.  Maybe that's selfish of me, but I had already had my heart broken a few times just rescuing pet-ready animals.  I didn't want to tangle with something that was wild, just to watch it hit by a car, or poisoned by a cat-hating neighbor, etc.

But my hand was forced this past February.  I started to see a black cat going through all of the yards on our street, including mine.  He wouldn't let me approach him, but seemed desperate for something.  I put some food out for him, and it was just GONE in about 15 minutes.

I can't stand the idea of an animal being hungry, so before we knew it, I'd purchased an extra bag of food for "the outdoor cat."  But then it wasn't just a black cat.  Then it became a black cat AND a white cat.  And then an orange cat.  (Though my wager is, the orange cat is owned - but is just an opportunistic feeder.  He doesn't have the lean and hungry look that the black and white cats had.)

We talked about trapping them, and having them spayed or neutered.  A neighbor told me that they'd actually been pets at one time, but had been abandoned a couple of years ago.  For a year, a teenager up the street fed them, but she went to college this spring, which is why they were foraging through my yard in February, I guess.

But they only came occasionally, and I figured that someone else had taken responsibility for them.  So I abandoned my idea of trapping them.  And I haven't seen the black cat for a couple of months, which doesn't bode well for him.  I find myself hoping that he just comes up after dark to eat.

But there have been plenty of "white cat" sightings.  In fact, just last week, she came up into the yard right under my nose.  Why do I know that she is a "She" you might ask?  Yeah.  Damn.  I should have trapped her and had her spayed back in February.  She brought three 12ish week old kittens up my front walk and showed them where the ever-full bowl of food was.  They were skittish of me, but happy enough to take my food.

Well, we decided that since she clearly wasn't ALREADY spayed (I guess it would have been too much to ask to have the owner actually spay her before abandoning her?)  that she needed to be, and soon, else there would be even more kittens.  Then there would be 50 cats running around our street, and I'm pretty certain that the neighbors would start to object.  And if we were going to have HER spayed, then we might as well nab the kittens as well.

We bought a live trap, and Jeff baited it with sardines.  Twenty minutes later, we had the mama kitty in our bathroom.  She is totally unhappy looking in this picture. 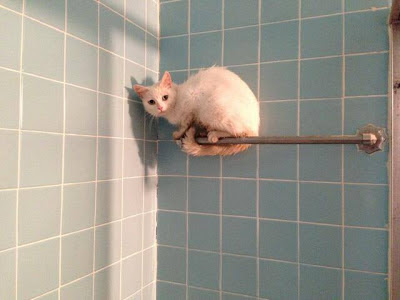 We've since captured three of her kittens. 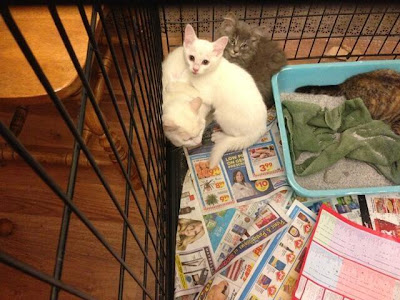 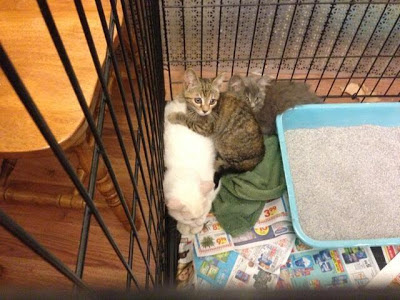 There's still at least one more white kitten that needs to be trapped.  I don't know for sure if there are any others.

And this is where I'm a bit at a loss about what to do.  We're going to pay to have them "fixed."  That much is a certainty.  I would LOVE to tame the kittens down to where they would make good pets and could be put up for adoption.  I don't know that it's going to happen that way, though.  They're VERY frightened of us, and absolutely wild to get out...

Update:  I stopped writing this because I got too busy well, with the actual physical caring for of the ferals.

Here's what has transpired:  we caught the final kitten.  Two pure white kittens, one gray fluffy, and one tabby that might be a torbie?  I'm not sure.  The orange in her fur, if it's there at all, is not very pronunced.

The shelter couldn't really help me with TNR until later in the month, which meant that I was a bit out of luck.  I was torn:  let them go again and try to trap them a second time?  Or keep them in a cage in my dinette?  Neither way sounded like a good option.

Before I did anything rash, I contacted a local group:  the Homeless Cat Management Team of Pittsburgh, and they worked some magic for me!  They got me into a clinic THAT Saturday to get everyone spayed and neutered and vaccinated,  which was fantastic!  As it turns out, only one of the kittens was male, the others female.  That's a whole lot of kittens that would have likely entered the world in the next year!

I still have them, but the kittens are actually going to a home this weekend!  A kind soul has agreed to step up and take them in and try to domesticate them.  I'm so very glad that this is a possibility.  We weren't able to do it:  absorbing four kittens into our household is just impossible at this time.  Four frightened, not-very-experienced kittens:  even more impossible.

Mama (who we have been calling "Snow") is most likely going to be a TNR.  She's been on her own for such a long time, that she just has zero trust in humans at all.  I haven't been able to convince her to soften her opinion of us in the two weeks I've had her.  BUT.  She'll be released where she has access to food, shelter, and she is freed from the breeding cycle.  So while I'd rather that she went into a home, I still feel pretty good that her life has been improved.

Everyone keep their fingers crossed that everything continues to work out so well.  I was very worried in the beginning, when I realized that SOMEONE had to be responsible for these babies, and that someone was us.  (I can't say ME, because Jeff has been part of this right alongside me.)


Posted by House of Carnivores at 7:19 PM