The Things We Buy

I never knew how many things it was possible to buy for your pets, until I started adopting animals, that is.  There are SO many things out there to buy.  Things that you never knew existed, and now you just can't live without. 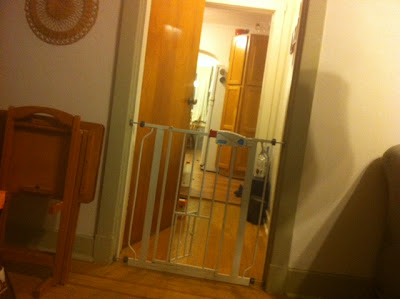 Yes, yes, ignore the dark picture and my junk in the background (it's cleaning day and as a result everything is MORE messy than it even usually is.)

But this treasure of the post-modern age that you see is a baby gate.  That swings on hinges, so that you don't have to take it down every time you need to pass through.  AND THERE'S A KITTY DOOR IN IT.

Our guests must think that we're crazy for having baby gates up all over the house when we don't even have children, but life. is.  sweet.

Other things that we've bought that I would have sniggered about a few years ago:

1.  Electrical drinking fountains for both dogs and cats.  It started out as an attempt to get the cats to drink more water (a successful attempt, I might add.)  Then when we had such a hot summer, I wanted a plentiful, cool, and fresh source of water for the dogs while we weren't at home, so the dogs got their own fountain.  They're nice.  You have to watch them, though - they get algae and scum in the tiniest nooks and crannies, so they're more complicated to keep clean than a simple bowl.  Also, the dog fountain is LOUD when it runs out of water.  It will bring me running from upstairs to fill it just to shut it up.

2.  Coats for the dogs.  I used to laugh at people who had their dogs in coats, but now that I have thin-skinned, largely fatless greyhounds, I know that they need the extra layer for warmth, just like we do.

4.  Dog toys.  They have a toy chest filled with them in our living room.  This is nearly all my fault... I just can't help myself.  They just get SO happy and excited when I bring home a new toy. 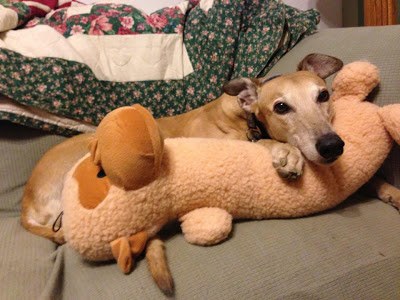 The latest are gigantic monkeys that honk when you squeeze them, and their feet and hands squeak. The cashier at Burlington Coat Factory, where I found these toys, was genuinely non-plussed when I bought them.  "What ARE those things?"  I think that she was silently questioning my sanity when I told her that they were dog toys.

5.  Multiple kinds of food.  To get our dogs to eat without complaint, we have to mix a certain amount of certain grain-free flavors of kibble (currently, we're using Merrick Grain-Free) with a little bit of canned dog food.  It has to be ground, mind you, because they're not enamored with chunks of meat.  The cats are little better - we have one that will only eat dry food and one that will only eat wet food.  Of course we almost always run out all at the same time, so as we're filling our cart at Petco with the 50 million kinds of pet food, we do get some strange looks.

But I would happily buy any of these things again and again.  Some just make life easier for all of us, others are certainly coddling my animals, but these guys have all had rough lives before landing in my house.  They deserve a little bit of coddling, eh?

There was a very nice man behind me in line at Petco today, whose eyes popped out when the cashier gave me my total:  I was after all buying a huge bag of dog kibble, an entire flat of canned dog food, and an entire cube of canned cat food, and a big bottle of glucosomine for Argos.  The man was buying a litter box.  He told me that there was a cat outside that was freezing, so he'd let him in and started feeding him and that he might as well stay.   He joked that he'd already spent a small fortune on food and supplies.  I told him that it was money well-spent, and that he was very kind to help out a cold, starving kitty.  And heck, if he can restrain himself from adopting multiple cats then jumping across the species line to adopt dogs, maybe he'll never see his grocery bill quite as high as mine.  :)
Posted by House of Carnivores at 6:01 PM