Well, the kittens went back to the shelter on Saturday, and were spayed and neutered.  They're not up for adoption just yet... I've been avidly watching the website.  I know that this time of year, they may well be waiting for cage space somewhere to open up, whether that's at the shelter itself, or in one of the Petcos, Petsmarts, Petlands, and other off-site venues that we can use.

The part about fostering that I hate the most...  it's not the extra cleaning, the extra time, and the occasional inconvenience of taking care of tiny life-forms.  It's giving them back up when the time comes.  But as any foster parent knows, it must be done.  I simply cannot "foster fail" with four kittens, LOL. 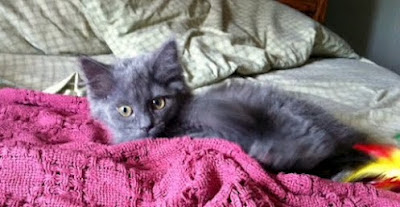 Though this picture made me want to.  Good lord, she's adorable.  And don't get me wrong, the other three are as well, they just didn't give me such a good chance at a picture like this one.

You can almost sense the relief from my adult cats.  We're all slowing down.  I don't spend as much time cloistered away now that I'm not trying to socialize the babies.  They've started coming back upstairs again, and Charlotte has rediscovered our air-conditioned room.  She MUST like the air-conditioning, if she decided to go along with THIS. 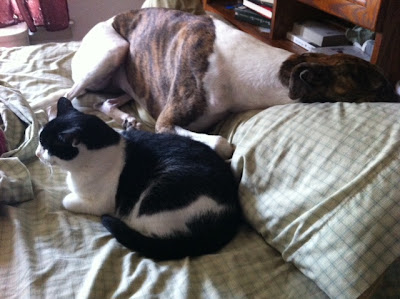 Because whether Charlotte completely approves or not, the air-conditioned bedroom comes equipped with its own greyhounds if they are given any choice in it at all.  They MIGHT come into the study with us if we're working on our computers.  That is air-conditioned as well, but it's always hotter because of the equipment running.  But most of the time (and even as I type this) they're lounging on our bed.  Oh, and don't judge my messy headboard.  Isn't that what library headboards are for? Collecting junk?

The person who came and met Tom last weekend hasn't contacted me again, so I am going to assume that she isn't interested. (And I don't judge her for that at all.  I wish MORE people would put some thought into which animal was suited for them before adopting.)  But bummer.  I mean, he's perfectly content here, but I do know that it's better for everyone, including and especially him, that he gets his OWN home.

And Argos... poor Argos.  The lad has had a very rough week.  We've had a few short but violent thunderstorms, which always just terrify him out of his mind.  Then there was the Fourth of July, which was extra loud and boomy this year, and left him trembly.  Then there seems to be a lot of roadwork going on nearby, the sounds of the equipment are upsetting him.

Unfortunately, he might be teaching Maera that thunderstorms are scary.  She'd been oblivious to them before.  But last night she was trembly and trying to climb into Argos's crate with him.  I lured her out with treats, and I could see her wavering.  She'd tuck her tail and start to tremble, then look over at the food, and lick her chops and go for it, forgetting to keep her tail tucked and forgetting that she was scared.  Then she'd finish the treat, look over and see Argos freaking out, and start to tremble again.  Rinse.  Lather.  Repeat.

We're still trying to keep cool around here.  Over the weekend the weather got close to (or maybe slipped over?) 100 degrees, and it's just nasty.  I feel like I'm trying to swim in a bowl of hot soup when I leave the air-conditioning.  It DID drop to the upper 80's today, which makes it much more tolerable.  It's still muggy, but it does wonders for everyone's spirits to have it be that 10+ degrees cooler.  It's supposed to stay in the upper 80's all week, dipping lower at night, and for once I hope that the weatherfolk are correct.

Bit doesn't get a photo.  Not that I don't love her, but because she is a freak.  She chooses to spend her days hanging out in the uber-hot sauna-like attic, and I am not going up there to get her.  She'll be down at dusk to demand food and attention, and may sleep with us in the AC at night, but will disappear up the stairs again tomorrow morning.  I will never understand that cat.


Posted by House of Carnivores at 4:41 PM