I've loved animals my entire life.  Even as a little girl, I remember being honestly baffled, when in answer to my query, that my baby-sitter told me that she preferred people to animals.  I had really, seriously, deep-down thought that any logical, sane human being would prefer animals over people.  Now, I'm not saying that's true, but that's how strongly I felt about it... and honestly, frequently as an adult I can say that I definitely prefer the company of my animals over that of most people. 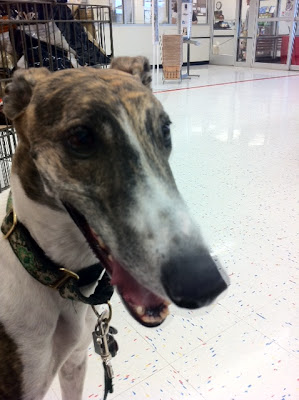 Yes, I am a person.  I can glean a certain amount of empathy for others just from that.

But many times, I'm just not very good at it.  It's not the way that I'm built, I guess.

And that is why I think that I like animals so much, and always have...  they don't make me guess what they want.  It's very obvious.  When Maera wants food, it's VERY obvious that she wants food, and she just wants food.  She doesn't have some deep-seated psychological need for me to do anything else while I'm getting her the food.  I don't have to say the magical combination of words, guess what is going on in her inner thought life, predict how my words are going to affect her.  She just wants food, dammit, right now, in her belly.  Easy peasy. 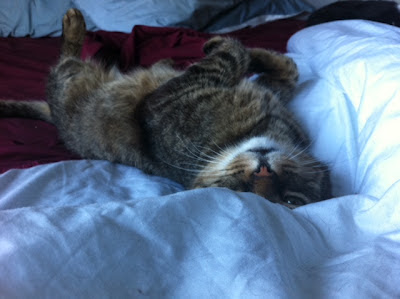 Not that my animals don't have emotional needs as well.  This picture is of foster cat Tom.  When he is doing this, which I call flirting, it means that he wants attention.

He is fairly direct.  I wish to heaven sometimes that when humans wanted me to pay attention to them that they'd fall over and wave their appendages in the air.  (Well, okay, that would be completely ridiculous. But maybe the human equivalent?  Instead of making me guess, emotionally manipulating me to give whatever the hell response that they seem to want to get from me?)

And it's always been the same with my animals.  Sure, each animal is different.  Some cats, for example, don't want attention when they're showing their bellies.  They'll claw your hands off if you try to pet them.  That's fine.  It happens once, and you know from then on what to expect from that specific cat.

So yes.  As if I needed any specific reasons to like animals, I would say that I like them because they're not complicated.  Yes, they all have personalities of their own.  Some of them present behavioral and emotional puzzles, which we have to solve or deal with in some way.  But regardless of the challenges that come with some animals, every single one of them, from the most feral cat to the most submissive, cringing dog, is easier for me to read and understand than humans.

A character flaw on my part, or a statement about humanity?  Probably a little bit of both.
Posted by House of Carnivores at 6:10 PM