Okay, I might be over-generalizing here.  But I've had three tuxedo cats (or near) in this house, and all of them have responded very well to flattery.  Moreso than any other cat that I've had living with me.

First, there's Charlotte.  Charlotte insists on going down to the basement with me when I traipse down to do the laundry.  I don't really want any cats down there.  It's dark, dreary, not clean, and has a gaping crawl space... it's up near the ceiling, but I've learned to never underestimate the determination of a cat.  So yeah.  I don't want them down there.  But the door has been cut to close over the stairs, and has no way to securely latch from the inside.  So I have to pull the door into the frame as much as I can, but I can't really secure it.  Charlotte sticks her paws under that door, brawny girl that she is, and yanks the door open at will.  The she, and possibly Annie, stream down the stairs, making a simple laundry run into a "catch the cat" escapade that they seem to enjoy, but I do not.

Why am I telling you all of this?  It's background information.

I've actually figured out how to get Charlotte to come out of the shadows pretty easily.  I don't have to trip over the garden hose to get to her, walk under the hanging clothes, anything.

I flatter her.  To the casual observer, I probably sound like I am trying to appease some Old God.  "Come here, beautiful lady.  My beautiful queen.  Look how the light reflects from your eyes.  How your fur looks like velvet.  Your nose is so pink, it's a work of art.  Your eyes so green.   Beauty such as yours should never be hidden in shadows."  (Do I sound unbalanced yet?  I think that I sound unbalanced.)  But dammit, it works.  I'll hear her start to purr from across the room, and then she'll saunter up to me, stopping if I stop the praise, but continuing until she's right beside me if I keep it up.  And then lets herself be picked up and cuddled and carried gently upstairs.  It works.  Every.  Time.

And then there was Patches, one of my two very first fosters, who was adopted by my mother-in-law.  He preens under praise as well, and while it doesn't necessarily make it easier to catch him, you can tell that he is responding well to flattery.  If we started talking about what a handsome boy he was, he'd purr and get very affectionate. 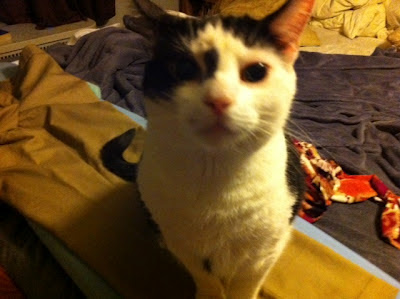 Patches sometimes comes back to stay with us for a few days while my mother-in-law travels.  You'll see above, he's sitting on a pair of dress pants and trying to look at my camera.

And then Junior, one of my most recent foster cats (who has since been adopted, yay!) also responded to flattery.  It's how I convinced her to come out from under the bed.  I think that she hid from me for almost an entire week when she first came into the house.  She was very frightened of her new surroundings, and very frightened of us.  I was starting to get concerned that she was never going to come out (how was I going to explain that to the shelter?) after I'd lured Tom, her fellow foster, out two days earlier with food, only to completely fail with her.  So on the fifth night, I lay on my side on the floor, peering under the bed without getting too close to her, and I just started talking to her.  I started telling her how lovely she was, and that no one was going to hurt such beauty.  That her eyes were gorgeous, and her fur so soft and sleek.  Etc. etc.  And suddenly I picked up on a very quiet purr, and watched her eyes soften and finally blink.  Moments later, she came slowly, cautiously to the edge of the bed and let me pet her.  Only for about 30 seconds, then she head-butted me in the face and ran back under the bed.  But at that point I knew I had her if I just was patient and gave her time.  And flattery.  Lots and lots of flattery.

So, as bizarre as it sounds, I am going to continue to use flattery with these gorgeous cats if it will help me get them to do what I want them to do.

Whatever works, right?
Posted by House of Carnivores at 6:51 PM