Life in the House

It's been an interesting first week with the two foster cats in the house!  We're planning on keeping them isolated from our other cats for the duration of their stay with us, but both sets of cats are wildly curious about one another, and are going to make that somewhat challenging.

And here is an update on the status of the House:

First, an update on Charlotte.  We took her to the vet for her now twice yearly check-up, which involves an x-ray of her chest and lungs to make sure that her heart condition isn't getting worse or that her lungs aren't filling up, as well as blood-work to make sure that her kidneys aren't shutting down.  They determined that she was still stable (yay!) and that we could just continue doing what we were doing...  .75 ml lasix twice daily, 1/2 benazipril pill daily, and 1 ml of liquid baby aspirin every three days.

This makes me very happy, because I had honestly been starting to worry about her a little.  I know that I mentioned on this blog a short time ago that she seemed clingier with me, and a couple of you mentioned that she should go to the vet.  I had thought of that too, and was dreading that we would find out that her condition had deteriorated.

I've also noticed a couple of other little ways that seemed like she might be slipping a little - she normally rules the other cats pretty firmly, and doesn't tolerate any kind of challenge to her authority.  And yet, I've watched her give ground to Bit a couple of times recently.  She also  has a scratch on her face from where someone was willing to fight her.

So, I'm happy with the vet's pronouncements on her health, but am still watching her with a cautious eye.   I can say that her appetite is still great, and she still tries to demand things from us, so maybe some of the slippage is all in my imagination. 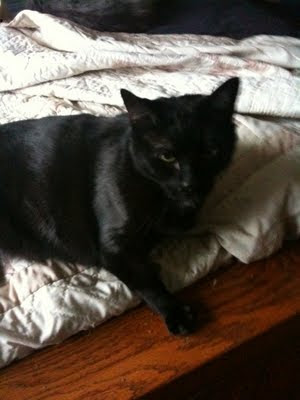 Annie, bless her heart, is the one that is having the most difficult time adjusting to the new foster kitties. (And even that is a mild reaction.)  She KNOWS that there are new cats in the guest room, and she knows quite well that when we shut her in our bedroom that those newbies are wandering around HER house with HER people, and she isn't thrilled.

Not that she has an aggressive bone in her body.  But I realized yesterday that she was hiding from me, sulking.  So I went and found her, and made a point to spend some time with just her, completely away from any of the other animals.  Her attitude had improved dramatically within 15 minutes of having my undivided attention. By the time I had to get up and move away from her an hour later, she was purring up a storm and very content.

I'm not worried about her; a mild case of "sibling rivalry" is really to be expected, and as long as I can show her that her place in the household hierarchy isn't being usurped, then I imagine that she'll adjust. 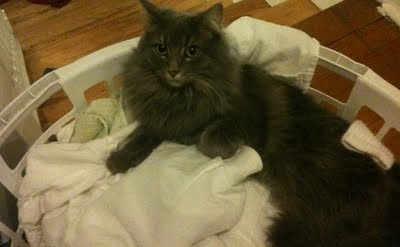 Bit, I'm pleased and surprised to report, has been a good little kitty this week.  She knows that the fosters are in the other room, and I see her sitting outside their door, but she isn't stalking, hissing, or otherwise being threatening, like she traditionally behaves around Romeo.

In fact, today we let her downstairs for a brief period of highly supervised time. She didn't really pick on him at all.  Yes, she went over to the papisan chair, in which he was sleeping, to look at him, which did not please him at ALL, but after satisfying her curiosity, LEFT HIM ALONE, and went and found another chair in which to nap.  Those of you who read my blog regularly know what a big deal that is.  She used to relentlessly hunt him, and would not stop for anything until we physically separated them.  Does this mean that there is hope for the House of Carnivores yet?

Romeo, as you can see, is still quite good at relaxing, haha, and seems to love to flash that belly at us.  It's tempting to rub it, but don't give in to the temptation.  He will most likely bite you, though if it makes you feel better, he'll be purring when he does it. 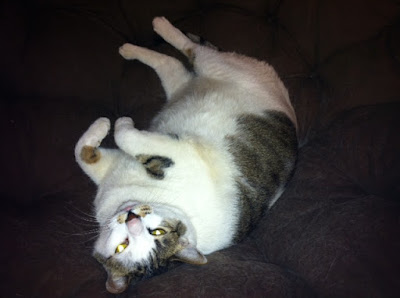 He seems happy with the way that things are.  At this point, this means that he spends some chunks of time by himself, and on certain days, is left alone with Argos downstairs.  The two of them seem quite content to ignore one another and are at least willing to peacefully co-exist.  We've started adding other cats to the mix as well.  Charlotte spends a lot of time downstairs now, because she seems to prefer it.  (If Bit is starting to challenge her, then she might just want to get away for awhile.)  She and Romeo only get into squabbles once in awhile now, usually if Romeo makes the mistake of coming back to the dinette to see what she is doing.  And now I've started letting Annie down when she wants to.  That seems to be going okay as well...  though Annie is not an aggressive cat.  We're being very cautious with Romeo and Bit, due to their history, but as you saw above, even that might not be a lost cause. 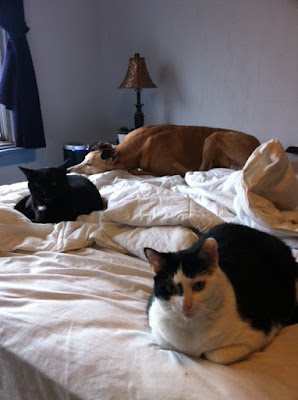 Argos is doing just fine.  He's getting better at basic obedience.  While I think that we all could probably benefit from a basic obedience course, he's doing much better with our commands to "lie down" or "stay."  It all started to improve once Jeff got the idea to not only tell him to do these things verbally, but to also do a hand signal.  He responds to that VERY well.  I wish we'd thought of it earlier.

He's doing much better with eating too.  Based on a couple of your recommendations, we now make a warm-water gravy out of canned dog food, and then thoroughly mix in his portion of kibble.  As long as we make sure that every piece of kibble is covered with gravy and canned meat chunks, he'll eat it.  He's even gotten somewhat excited about it!  When I stand in the kitchen preparing this lovely concoction, he stands in the doorway and whines.

And...  as you can see in the picture, he's getting along just fine with the foster kitties.  No, they're not snuggling up to one another, but resting on the same bed is huge!  (And no, we're not just leaving the fosters alone, unattended, with our greyhound.  It is all very heavily supervised.)  Patches is supposed to be frightened of dogs.  He does treat Argos with a somewhat wary caution (which I think is a perfectly reasonable and sane reaction)  but the only reason that we don't have a photo of the two of them nose-to-nose during their first meeting is that Jeff wasn't fast enough to reach for his camera!   He says that he wishes that he had, because the expression on both of their faces was priceless.  They were both fascinated, and it was if they were asking, "What is THAT?"

Posted by House of Carnivores at 7:44 PM