I am back home from my Easter journey to the mid-west.  I had a great time visiting with the family; I only get to see them, on average, once a year.

Jeff's time alone with the animals went well, as far as I can tell, anyway!  I know that they kept him busy.  I have been the person left behind a couple of times, and I do know that when there's just one of us here, the animals can really keep you hopping!

Everyone seemed glad to see me.  As usual, Bit avoided me and essentially gave me the silent treatment until the next morning.  THEN she was super-affectionate and clingy, and wouldn't let me out of her sight.

The fosters were excited to see me, even though they've only known me for a few weeks now.

Romeo probably could have cared less.  He's becoming more affectionate, but I don't think he's bonded with us quite like the rest of them have.  My suspicions... and they're only that, because I'll never know for sure, is that he was bonded to the lady in his previous home.  She had the baby and kicked him out the door, and Romeo is still trying to make sense of life without her.  I don't know why I think this.  Maybe because there are days that he still seems glum.  There are days that he brightens up when he first sees me, then looks disappointed, as if he initially thought that I was someone else.  Poor Romeo.  I can't give him his "person" back, but I do hope that I'm doing enough to make him as content as possible.

Argos was ecstatic, and over the moon to see me.  He raced down the stairs and kept circling around me and sniffing my clothes, wagging his tail, and whimpering.  With Argos, there was nothing to be forgiven - he was just thrilled to see me.

Here is Charlotte, preventing me from leaving again. 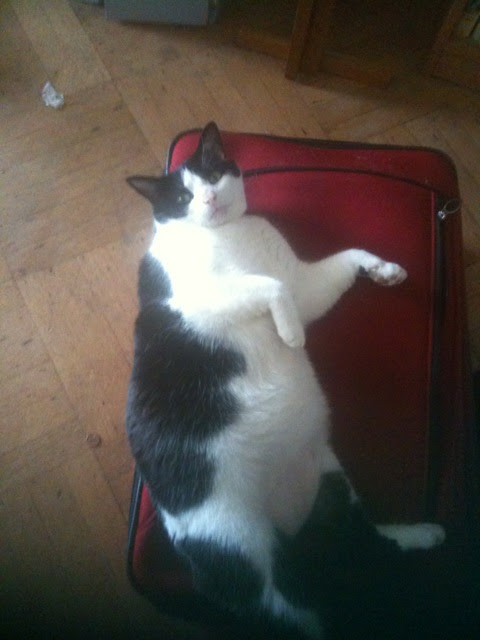 Posted by House of Carnivores at 12:28 PM