State of the House

Tonight didn't start out well.  Jeff had to drive home in a thunderstorm, which also brought very "interesting" hail for him to drive in.  By the time that he got into the house, Argos was practically out of his mind with fear.  (I was still at work, so couldn't be here to comfort him.)

He somehow got him to go outside for a potty break, but at this point he's completely refused to eat his dinner, and was even willing to run up the stairs past all of the cats (something he never does) in order to get to his sleeping crate to hide.  He's even refused to eat his treat.

He's calmed down a little bit now that the storm is over, and is curled up on the couch with me.  He keeps giving me sad looks, as if silently asking me why I caused such a scary storm.   *sigh* The downside to dogs thinking that we're something akin to gods.

Maybe I was just punchy and tired the other day, but the following picture made me laugh for several minutes.  Not because Annie was hanging out on the couch arm, which she frequently does, but at the curious dog face in the background.  I call the picture  "Annie, with Accidental Argos." 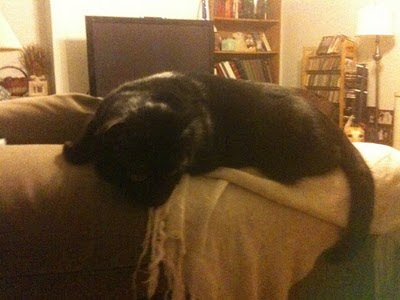 Annie was far less amused with it, and turned to give him such a cold stare when she realized that I was not, actually, laughing at her but at him.


Meanwhile, Charlotte has been uncommonly friendly, even clingy.  Last night she "guarded" me while I bathed, usually Annie's job, slept on the bed at least part of the night with us, and sat on my lap on the couch tonight while we watched some t.v.  I have no idea of what is up with that, not that I'm complaining.  Just really, really confused.
Don't get me wrong - she can and does show us affection, but it's always on her own terms, and she totally reserves the right to completely snub you.  But I haven't been snubbed for an entire week! 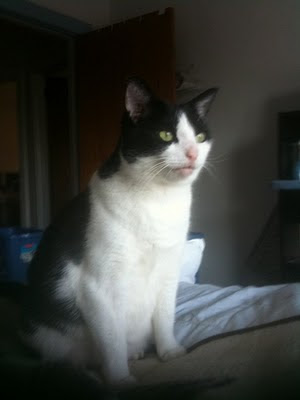 And because no still photo can completely catch the intensity that Argos puts into his squeaky toys, here is a short clip of it.  Now think of this going on for about half an hour straight while you're trying to watch a movie or make a blog post or something of the sort!
I got this skunk from Drs. Foster and Smith on Friday, and Argos was over the moon about it.  He even insisted on taking it outside into the backyard with him the next morning, he was so loathe to be parted from it.
Romeo is having a good week as well.  Last time we were at the vet, he mentioned in passing that Romeo seemed to be one of those cats that always had at least a mild case of conjunctivitis brewing in their eyes.  He showed us, and it was barely visible, but definitely some redness.  The vet recommended a lysine supplement for his food.  Well, going back to Drs. Foster and Smith, I saw that they had a lysine powder supplement.  We've started sprinkling it on his food, and his eyes do noticeably look brighter.  So I'm glad that it worked!  I do feel bad that I didn't notice that he had conjunctivitis, though.
Here is Romeo, lying on the forbidden table.  This table was kind of a big deal last year because we got it and swore that this was one piece of furniture that we were never, ever going to let the cats jump up on.  You see where this is going, don't you? 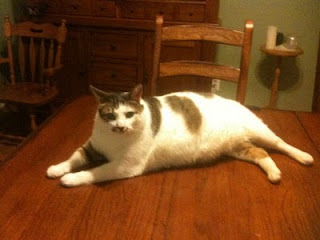 The only cat that you won't see a picture of is Bit.  Right now she is having a "Mommy is terrifying" day and is avoiding me like the plague.  I have no idea why, as she was sleeping snuggled up against me when I got up this morning.
So that's really it.  We're all looking forward to the weekend...  for now, it's just get up, do the routine, go to work, come home and continue the routine, go to bed, repeat.

Posted by House of Carnivores at 6:21 PM