I've made a couple of "spotlight" posts about some of the other animals recently - Bit, and earlier on, Annie.  And thought that it was time that I added something about Charlotte, queen of the household (I accepted long ago that it wasn't me.) 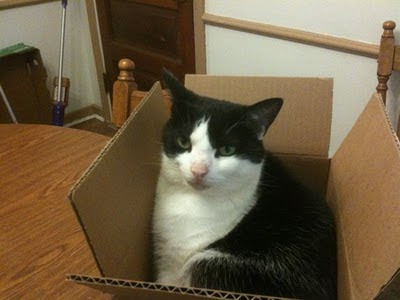 Probably most of you already know that Charlotte is considered to be a "special needs" pet, because I mention it frequently on this blog.  But for those that are new, I'll recap.  Shortly after we adopted her from the shelter, she started to sound like she was trying to cough up a hairball, except that it didn't respond to hairball remedies, and kept getting worse.   After a series of vet visits,  a misdiagnosis (I don't blame the vet; Charlotte didn't present the normal symptoms) and a night of crisis in which she collapsed, gasping for air, the true diagnosis was finally made:  she had congestive heart failure.  Not only that, but the scar tissue on her heart was evidence that she had probably already had at least one heart attack in her life, probably more.

The prognosis for a cat with congestive heart failure is not good.  We keep her alive and comfortable with medication, but this disease WILL eventually take her life.  My thought on that is that as long as she is comfortable and happy, the daily medication is a small price to pay.  And she has outlived everyone's predictions so far.

However, Charlotte refuses to be defined by her illness.  It's evident in her mannerisms, and in everything she does.  She rules the house with an iron, er, paw, and does not hesitate to put the smack-down on any of the cats that challenge her authority.  I know that I've recently complained about her abusing Romeo,  but that is a separate issue entirely.  She does mostly get along with the other two cats, but there is no doubt about it that she expects them to be submissive to her.  (And is rarely challenged.)

She's always been that way, from the day that we got her.  I have also mentioned a few times on this blog that I did not choose Charlotte at the shelter; I'd already chosen Annie.  But Charlotte chose me, and with a show of physical force (she reached through the bars of her cage, hooked me with her claws, and YANKED me to her.)  Some people might have been terrified about this forceful gale of a personality housed in a cat, but I was fascinated.  I looked into her large, green eyes, and actually spoke aloud, "Do you want to come home with me?"  And the look in her eyes clearly spoke, "Well, duh.  Get me out of this place." 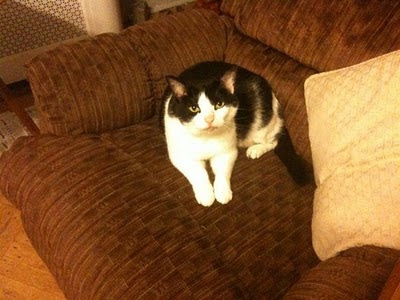 And that has defined our
relation- ship ever since.  Though for all of her bossiness, Charlotte is very devoted to me.  Jeff has told me that she waits until about twenty minutes before I come home from work, then comes downstairs to wait for me on the back of the chair, so that she is the first thing that I see when I walk in the door.  And as soon as I come in and acknowledge her, her purrs fill the entire room.

If I'm crying, she is the only one of the cats that isn't afraid of my tears - and will jump up and just BE with me.  She doesn't try to comfort me or cheer me up, but lends me her presence and her strength.

I find myself using her as a sounding board, and I'm admitting this even if it does make me seem a little unbalanced.  But it's so UNCANNY how she seems to understand everything I say.  She sits there and listens to me solemnly, unless she's in a particularly chatty mood, and then she makes commentary.

Oh, she bosses me around.  She is currently trying to do so, even as I type.  I can hear her on the other side of the door that shields Romeo from her (I'm in the living room with him and Argos) demanding to be let in.  No one else in this house has such a strident meow.  She demands to be fed, she demands milk.  She even demands that the litter box be cleaned NOW so that she can use it while it's clean.  She demands to be let into the cedar closet (don't ask) and demands to be let into the basement.  It never crosses her mind that I might say no, and to say that she looks puzzled and offended when I DO say no is an understatement at the very least. 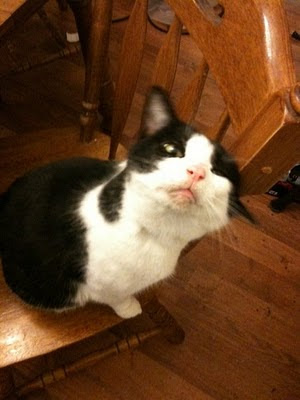 She is a real handful sometimes - her personality probably isn't for everyone.  She's opinionated, stubborn as an ox, determined, forceful, and has a vicious temper when provoked.  (Hmm.  I'm not going to explore why I'm drawn to that.  Not tonight.)

But I adore her, even if I'm not completely blind to the fact that she can be quite... difficult.  It's like she knows that her time is short, and is trying to pack as much punch into her life as she possibly can, in order to leave her mark.

Oh, Charlotte, you've left your mark.  Our household and our hearts will never be the same for having known you.

And on that note, she's moved on from howling at me through the door to applying claws to the underside of the door.  I think that I'll go and let her in and pick her up...  I might grump that it is mostly to spare the door a splintering, but I think we all know that it's because she has me wrapped around her little finger.  Around her little claw?
Posted by House of Carnivores at 6:17 PM