It is Friday, at long last.  It's been a rough week, especially for Romeo and for me.

We had an unexpected family tragedy early in the week, and as if that wasn't sobering enough,  I started to come down with a nasty cold late Wednesday afternoon and have been slowly tanking ever since.  I'm out of time off at work until March 1, so didn't have the option of staying home.  So, trooper-like, I drug myself into work for two more days, probably to the dismay of my co-workers.

Romeo is still struggling to fit in, as we discovered when Charlotte snuck downstairs and got locked in with him all night on Wednesday.  I am too tired to go into many details, but it is clear that they're not ready for unsupervised time together yet.  I was extremely disappointed.  I have reached out to several people who are more experienced with multiple cat households than I am, and got some good advice. The next thing that we're trying is valerian root, which Kat from Kat's Kats recommended.  I'm going to make a tea out of it this weekend, and then dab it on all of them.  I'm guessing back behind their necks where you'd normally put flea treatment.  Not only do cats tend to like the way that valerian smells, but the hope is that it will make them all smell similar enough to one another that they just accept that they're a pride, and get on with life.    Keep your fingers crossed for me. We need to get these kitties socialized with one another!

And speaking of Romeo, his fur was starting to look really nasty.  He's a big boy, and I think he was having difficulty reaching his back to groom himself.  So Jeff, my beloved husband, knowing that I didn't feel up to it but was going to guilt myself into doing it anyway, took it upon himself to give Romeo a bath before I got home from work tonight.  I'd purchased a cat shampoo from Petco last week.  He looks much better, though damp and NOT pleased, in the picture below. 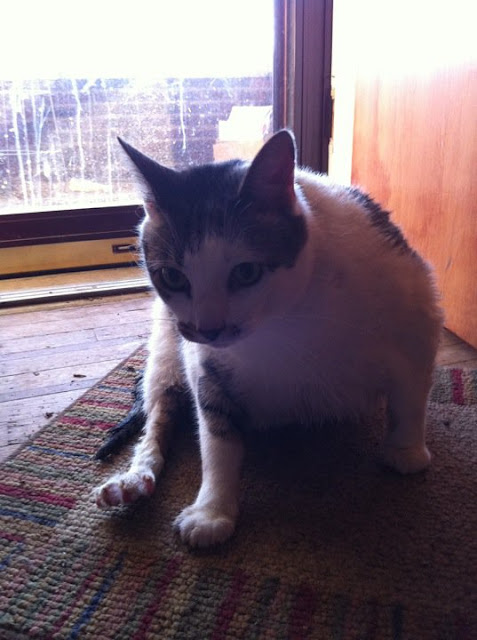 Please don't judge me for the streaky window behind him.  It's February in Pittsburgh and I can't keep up with the salt and the snow and the ice and the slush!

He does seem to be adapting well to a reduced diet.  It's still his regular dry food, but measured out morning and evening instead of allowing him to "free feed."  I don't know that he's actually lost any weight yet, but these things don't happen overnight.

Some of you may remember that this summer, I made a post about how nicknames for our animals seem to proliferate in this house.  (http://houseofcarnivores.blogspot.com/2010/08/animal-nicknames.html) for those who weren't following at the time or who chose for some strange reason not to commit this to memory.  At the time, I mentioned that Romeo and Argos didn't have as many nicknames because they hadn't been "blessed" to live with us as long as the girls had.

But Romeo has another nickname now.  It start out as Puddin', then became Pud', then inexplicably became "The Duke of Pudding."  So there you have it.
Posted by House of Carnivores at 4:56 PM