Perhaps I have Created a Monster...

I am home alone with the animals for a few hours, something that doesn't happen all that often.  And I think I may have created a monster...

As soon as I got home, I fed Argos.  Then I brought him outside with me so that I could cook MY dinner on the grill - chicken and zucchini and yellow squash.  He was SOOOO excited about the chicken that I made some extra so that I could give him a few pieces.  (No worries - it is boneless chicken breasts.)

So as I'm eating, I give him several bites of chicken.

Then he still seems to be crazy restless hungry, so I give him an additional 3/4 cup of kibble on top of the generous serving that I gave him for his actual dinner.

Haha, it was a full half hour before he'd leave me alone enough for me to finish my meal.

It's probably best that we don't usually indulge him this much - otherwise, he'd quickly become unsufferable every time we wanted to eat!

I have to say that I feel an immense amount of satisfaction in watching him fill out though.  Here is a picture of him begging for even MORE food, giving me the "I'm starving to death" look. 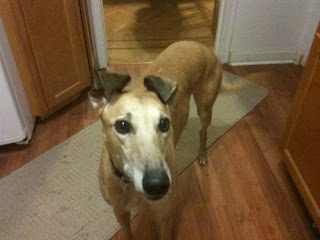 Posted by House of Carnivores at 6:15 PM