I should have known that the other shoe was about to drop...  things have been going SO well lately, and I'm maybe kind of sort of a little superstitious about that.  Or maybe it's just that I'm well aware that life has its ups and downs, and we hadn't had any serious downs for awhile.

When I got home from work, Charlotte was in the recliner.  Nothing really odd there.  I said hello to her and gave her a quick scritch, then grabbed Maera and took her out - Maera was due for her annual vet check-up and vaccinations.  So I took Maera to the vet's, and we came back a little under an hour later.  Charlotte was STILL in the recliner.  And she stayed there all through dinner, and didn't jump down until we made it obvious that we were going upstairs for bed.  I remarked about it, but still wasn't that alarmed.

Until she started choking and vomiting in the hallway.  And her breathing was labored.  She was only able to bring up clear fluid.  All of this was starting to look distressingly familiar.

Then we started talking.  I remembered commenting over the weekend that she looked like she'd put on some weight.  As I was petting her last night, I realized that quite a bit of the weight was in her front legs.  Then I had a light-bulb moment:  that wasn't fat, that was fluid.  She was retaining fluid.  And the clear cat vomit that I'd stepped in earlier that day probably wasn't from Bit bolting back her water like she sometimes does.  It was likely from Charlotte.

I felt sick.  I HAD seen all of this happen before.  Four years ago.   The only thing keeping us from rushing her to the vet in the middle of the night was that she didn't seem to be in too much distress.  After her bout of vomiting, her breathing seemed to return to normal.  We resolved to call the vet first thing in the morning.

And Jeff did.  After he described her symptoms, they told him to take her to the emergency vet clinic.  And so he did.

And it's congestive heart failure.  Again. 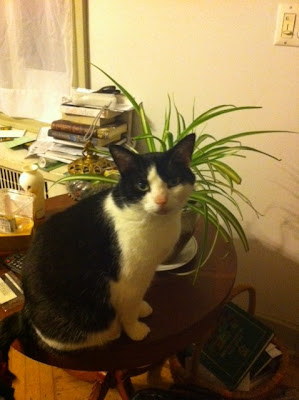 They pulled 100 ml. of fluid out of her chest cavity today.  (How can there even BE that much fluid in a little tiny chest?)  We got a call around 7:00 PM to tell us that she seemed to be responding well to the doses of lasix that she's received there so far.  She's still on oxygen to help her breathe.

They're going to try her on three medications tonight:  if those seem to help her, they will probably be what we have to give her for the rest of her life.  (And I'm so, so okay with that if it means that we get Charlotte back.  For however long that may be.)

And they want to do an ultrasound on her abdomen in the morning.  The cardiologist and the team of vets there are concerned about the legs retaining fluids.  They normally don't do that with "mere" congestive heart failure.  They want to be sure there isn't something else causing it.  Which freaks me out so much because there can be nothing good in her abdomen causing fluid retention.

So now it's a waiting game.  Will the medication work?  Will the abdominal ultrasound find anything of concern?  Will they be able to wean her off of the oxygen?  Will we get her back again tomorrow night?

I hate it when a pet is hospitalized.  There's no way to tell them that they haven't been abandoned.  That we WILL come back for her if she survives.  That said, Charlotte has always handled this kind of thing rather well in the past.  She alternates between bossing around the vet techs and sucking up to the staff.

So everyone keep their fingers crossed, send prayers and good thoughts Charlotte's way.  She needs them.  We all need them.  It's been a very emotionally draining day.

And while this post is about Charlotte, and she dominates my thoughts and emotions tonight, I just can't leave it on such a "down" note.  I want to show you a picture of what we've been up to the past week and a half. 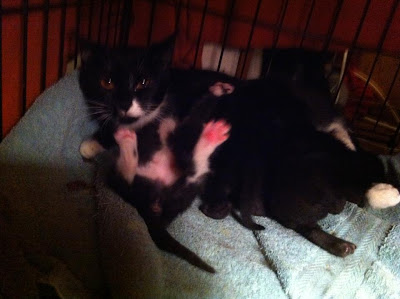 What is that, you say?  How can one cat have so many feet?

Yeah, we're fostering a nursing mama cat and her four kittens.  The babies are two weeks old at this point.  The picture is a little dark because they're at the back of the "den" that I made for them, and the lighting is poor.  Mama (we're calling her Janis) doesn't like it when I over-handle them, so I keep that to a bare minimum and just let her do the work.

I went in to feed her and scoop her litter box, feeling heavy-hearted, sad, and worried about Charlotte.  I poked my head into the den, watching the four babies nursing.  And then I heard it.  Purring coming from two teeny, tiny little babies.  It brought tears to my eyes.

Dare I see it as a sign of hope that one of them looks a lot like a miniature Charlotte?

Posted by House of Carnivores at 6:26 PM