I put together some quick, inexpensive costumes for the dogs tonight, because we have a Howlin-ween party to go to on Friday night, for the grand-opening of a local doggy daycare, Urban Dog Day Care  (Door fees are going to be donated to Steel City Greyhounds!)

So here they are: 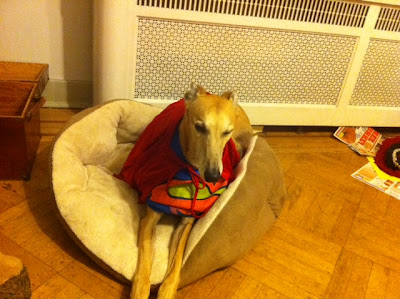 Argos is, as you can hopefully see, Superman.  He looks pretty annoyed about the costume, and that's because he actually is pretty annoyed about it.  He lost patience with me fussing with his cape after oh, five minutes.   That's a cape for a female vampire costume, and a child's Superman logo t-shirt.   We thought about dressing him up like "Bark Kent, Mild-Mannered Reporter," but that one might have been too difficult to make obvious. 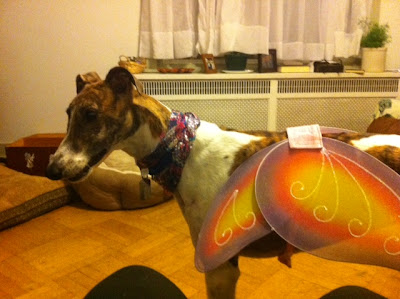 Maera is a fairy princess.  That's a set of child's fairy wings, and a child's sparkly sequiny scarf.  You may notice two things.  One, the wings are on backwards (I think.)  If the large wings are anywhere near her face, she eats them.  She turned into a wild bucking bronco in the beginning, because she was desperate to eat those wings.  I have no idea of how the party Friday is going to go...  it may be the most short-lived costume ever!   The other thing that you may notice is that she is NOT wearing lavender feathery glittery "bracelets" around her forelegs.  There is a reason for that.  She wants to eat those too, and I think she might actually succeed at that so am probably leaving them off.
Posted by House of Carnivores at 7:26 PM