My blog went on an unintended hiatus while I waded through the insanity that was December.  The holidays are a good time, but there is so much packed into those days!  We're all doing well, though, so I thought that I would get on and wish everyone a happy holiday, and give a status update on the furry ones in my life.

Argos is being such a good dog this season... though he IS the reason that we didn't get a tree this year.  I was uncomfortable with the idea of leaving him alone in the living room with a decorated Christmas tree; I was afraid that the strings of lights and the shiny ornaments would be too much temptation for him.  And since there was no way to shut him out of the living room without sticking him in his crate all day, I just decided to do without the tree.  I pulled out a little table-top tree on Christmas Eve, so that we could put presents around it, but by then Argos wasn't going to be left alone. 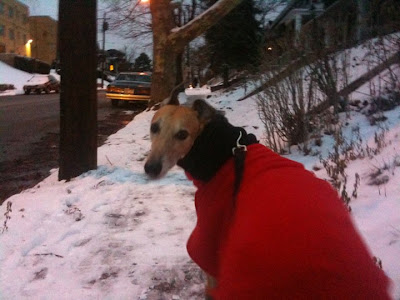 Here he is, reluctantly modeling his new fleece coat.  His pleading look is begging me to hurry up with the pictures so that we could take our Christmas evening walk.   This was a big one for him - it was his very first Christmas inside of someone's home.  He was perplexed, to say the least, when we started opening presents and throwing wrapping paper around.  And then intrigued.  Eventually, I had to try to distract him so that he didn't eat all of the wrapping paper.  And of course, he received a couple of squeaky toys.  One he chomped a hole in within about 20 minutes, which was unfortunate, but at least he had fun doing it! 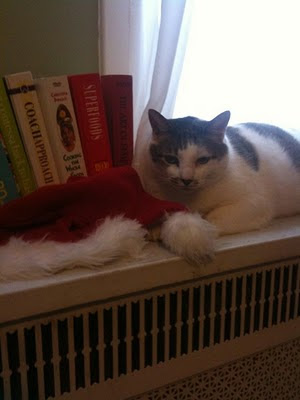 Try as I might, the cats were simply not getting into the Christmas spirit this year.  I tried to put the santa hat on all of them, and was rejected time and time again!  This picture is the closest I got to getting them to wear it.  As you can see, there is not much wearing going on.  Instead, Romeo has a smug, mean look about him that suggests that he's belching and commenting, "Tasty elf."

Though he has been showing some progress on other fronts.  I mentioned in my last post that he was frequently failing to use the litter box.  That seems to be getting better...  maybe?  Like I said before, he has good days and bad days.  We've tried to liven up his routine to keep things interesting for him, as well as make sure that he's getting enough attention from us.  So some days he gets to stay on the first floor of the house, which gives him access to us in the evenings, and gives him some of his favorite perches.  Other days we put him in our bedroom with us, which means that he gets to sleep on the bed with us all night.  He seems to enjoy mixing it up.  He gets more exercise when he's downstairs, which is a good thing, since he definitely needs to lose some weight! 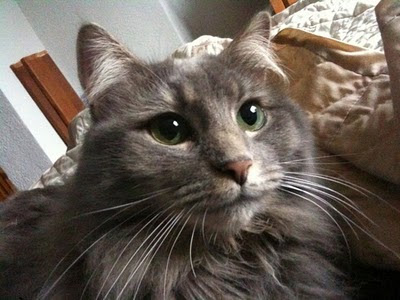 Bit is still herself... which means that she is being a sweet, gorgeous, lovable airhead most of the time.  She's the most playful of all of our cats.  First, she is the youngest, but second, we're convinced that she has some Maine Coon lineage in her.  That is supposed to be a trait of the breed.


She's the only one who will play with the cat toys that they got for Christmas.  I find them in strange places all over the house.  The latest finding was a little stuffed toy, which was artfully tucked into the toe of my boot.  I was wondering why it was so hard to pull on!


Sadly, she still has a particular hatred of Romeo.  At the moment we're not even giving them the opportunity to interact.  We believe that Romeo needs to become more confident in himself before we try that one again. 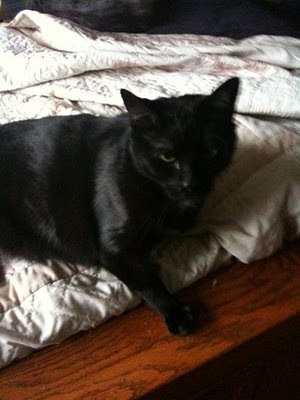 Annie is, I am firmly convinced, trying to be the best cat in the entire world.  Sometimes, I think she overdoes it a bit, but she is determined to show her affection.  She attends me while I'm in my bath, sits with me when I'm reading, purrs if I even look in her direction, and wakes me up if it looks like I'm going to oversleep.  She licks the back of my hand, or if that's not possible, she's even been known to lick the top of my foot.  She's even being better about Argos!  (She is the one who will smack him for no reason whatsoever, just because she can.)  I feel lucky to have such a delightful cat, but sometimes feel bad for her; her affection seems to be somewhat desperate sometimes.  I lavish attention on her, so I'm not sure where all of that is coming from.

This picture is the best that I can do for her.  Her particular brand of affection makes it really difficult to take a picture of her; when I back off a few feet to snap the picture, she follows me!

Which leads me to the last of the critters, my darling Charlotte.  Who you will note does not have a picture on this post.  This is because, despite the fact that she has  been affectionate with me throughout the entire season, she has absolutely refused to pose for any pictures.  It's as if she sees me bring out the camera, and decides to leave the room, with one disdainful flick of the tail.  So.  No picture of Charlotte.

She is doing well, though.  She is still in good health, and is actually turning into quite the winter dumpling.  I know that some of that is her winter coat filling in, but that's not all fluff!  The lady has some pudge.  I love to see it on her, since weight loss can only mean that her condition is worsening.  So yes, for once you're going to see me cheering an overweight animal.

And that is that...  I will try to make another posting soon.  I am not going to become a once-a-month poster, I promise!
Posted by House of Carnivores at 5:38 PM