Hello, readers!  And happy Thanksgiving to you.  Mine is essentially over, because we eat our feast early in the afternoon, but that doesn't mean that I can't pause and reflect on what makes me thankful.

1.  I am thankful for my family and friends, all of which have been so supportive of me over the years, even through my idiosyncrasies.

2.  Now that I've made the "encompasses all" statement, I would like to let it be known that I am especially thankful for my husband.  We celebrated ten years of marriage earlier in the month.  We're such a great team, and he really does bring out the best in me.  And he's great with the animals.  There's no one else that I would rather have with me in our house of carnivorous creatures.  :)

3.  I am thankful that we (humans and animals) have had reasonably good health this year.  Minor colds for the humans and a bladder infection for Romeo were the biggest worries. 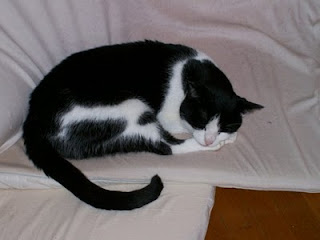 4.  Which leads me to a biggie:  I'm thankful that we still have Charlotte.  The veterinarian predicted that she wouldn't even be alive at this point.  I know that we're on "bonus time" with her, and am so happy for every day that we have. 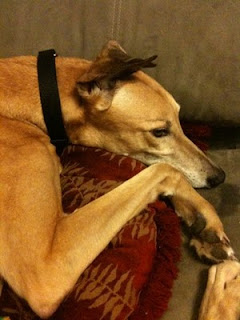 5.  And here's a big one:  in the middle of January, just about two weeks before Snowpocalpse buried Pittsburgh in over three feet of snow, we adopted Argos!  I remember how scared I was at the time that we were going to be horrible dog owners and that any day now, people were going to realize that and come and take him away from us.  I know.  Crazy stuff.

We have bonded over the year, having been through Snowpocalypse when he was still very new to us, the ever continuing Cat Wars, learning how to interact with one another, going on vacation with him, taking him to the dog park. And he has rewarded us tenfold with his affection and devotion.

So I am very thankful that we got to adopt him, and I know that he is very thankful to have a home, especially one with two people so very determined to spoil him rotten. 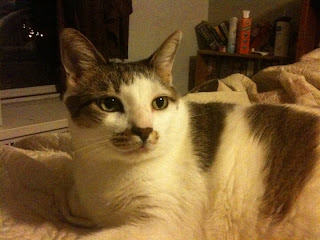 6.  And here's another biggie:  over Memorial Day weekend, we decided to give another cat a home.   As is my usual tendency, we wanted to give a home to a cat that might have a difficult time getting adopted otherwise.  We went out thinking that we were going to get an adult black cat, but wound up with Romeo instead.  Romeo was obese, seven years old, and was kind of glum (the guy HAD lost the only home he'd ever known, and was too large to be completely comfortable in a cage.)  He'd spent a long time with the shelter.  We brought him home.  We continue to have some adjustment issues with him, but we're willing to be as patient as it takes.  I have grown very fond of his quirky self, and am so thankful that we have him. 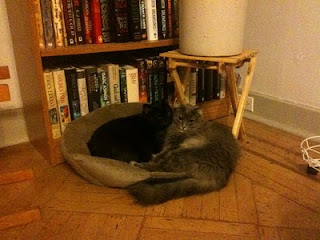 7.  And of course I don't want to leave Annie and Bit out, even if they haven't survived beyond what was expected of them, and even if we didn't adopt them this year.  :)  They're both sweet, affectionate cats, and they make my life a little bit brighter by being in it.

8.  I'm thankful that I found the pet blogging community - I have gotten levels of support that I could have only dreamed of!  You are such a great group of people, and I am thankful for every one of you!  Finally!  A group of people that doesn't make me feel somewhat freakish for loving animals as much as I do, or for having as many animals as I do.

I think that hits the high points!  I'm thankful for other things too, such as my job, etc., but I figured no one really wanted to hear about that.  :)

One more thing:  if you're reading this, and haven't done so already, would you vote for Steel City Greyhounds in the Pepsi Refresh challenge?  You can vote DAILY if you feel moved to do so.  We are at this point #12 in the 5K contest.  We need to drop two more ranks to at least #10 to get the grant money, and we have to do it by November 30, the last day of the contest.  So I hope that I'm not beating a dead horse (what a horrible phrase, must think of a different one) but if you would please, please vote that would be fantastic.  Let's give more of the gorgeous greyhounds something to be thankful for!  (There is a button that allows you to vote directly from this blog.  It's free, and only takes a couple of moments.)  I appreciate the help.  I know that many of you have already voted, and I am very thankful for it.  (See, another thing to be thankful for!)

Posted by House of Carnivores at 3:27 PM